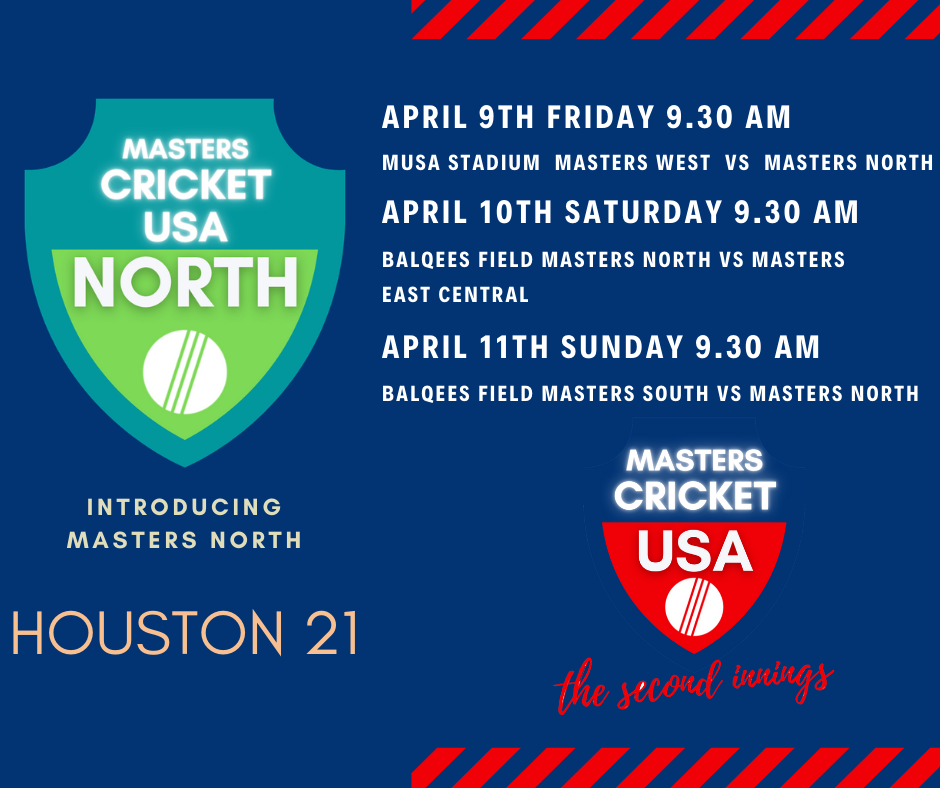 Introducing Masters North Team for the 1st national over50 cricket tournament. With Exactly a week to go for the first game of the first ever Over 50 US national cricket tournament at the picturesque Musa Stadium in Houston here is a chance for us to preview the competition and the teams.

Over 50 Cricket has been played around the world in cricket playing nations for a long time but over the last few years it has taken a whole new dimension thanks to the vision of Mr. Stirling Hamman a lifelong cricket enthusiast from Australia. He teamed up with Mr. Roger Moult (South Africa) and Jim Morrison (New Zealand) to organize the first ever Over 50 Cricket World Cup in Australia in 2018 which had 10 international teams took part.

The second edition of the World Cup was in Cape Town, South Africa in March 2020 which had 12 teams but unfortunately had to be aborted due to the pandemic. Although the tournament was unfinished what it indeed did was light a fire amongst cricket loving veterans all over the world to begin their second innings and realize that “you don’t stop playing cricket because you get old but you get old when you stop playing the game you love”. So, thank you Stirling, Roger and Jim for lighting the fire to begin our “second innings”. You guys are an inspiration.

The first edition of the US Over 50 nation tournament will feature four teams. Masters North, Masters South, Masters East Central and Masters West. Today we take a look at the “Northmen.”

The Masters North is led by Dilip Chavan who happens to be the present President of the Mass. State Cricket League. He is a belligerent batsman who brings a ‘Mumbai’ flavor to this team and recently represented the India Over 50 team in Cape Town. The North features a strong batting line up with Shahid Shahzad, Mark Audain leading the charge. Shahid is a devastating batsman with a recent distinction of scoring 5 centuries in a season in the New York League. The team is packed with all rounders Vishal Thakur, Deepak Chadha, Rajiv Shah, Bharat Patel, Darshan who along with the talented wicket keeper Mark Wright add depth to their batting lineup. Deepak Chadha recently represented India Ove 50 in the World Cup. Mark, who is originally from South Africa has the distinction of representing USA and recently has been named a selector for USA cricket.

The North has a potent bowling attack with Lalit Bhatia, Mark Audain who has played for West Indies over 50 team, Vishal Misra and Dilip handling the new ball. Lalit still bowls at a brisk pace. He is very passionate about coaching and his son, Rahi, was named to the East Zone Under 19 team. Vishal Misra is the founder of CricInfo and now is a professor at Columbia and is still as passionate about cricket and statistics as when he was 7 years old.

This team has an embarrassment of riches in the spin department with Vishal Thakur, Deepak, Rajiv, Manas, Bharat, Sanjay and Himashu lending depth and variety.

Although the grizzly Northmen have a disadvantage of not being able to play any practice games because of the wicked winter they are a team packed with experience, talent and spirit and will be a hard nut to crack.