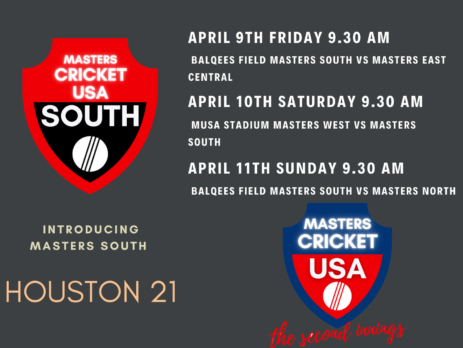 Masters Cricket USA2022-03-26T08:04:26-04:00
With less than a week to go for the inaugural Masters National Cricket tournament, today we introduce the Masters South team. The south has always been known for its hospitality and largesse, and it starts with Sakhi Muhammad.
One of the most passionate cricketers and cricket supporters and following in the footsteps of the legendary Abdul Qadir, he has carved out a niche for himself in the Houston cricketing circles as a phenomenal leg spinner as well building the Musa stadium all with his own money with two turf wickets and a practice facility. Hats off to Sakhi bhai for throwing open his stadium for the inaugural Masters tournament. The South is led by another giant in the USA cricket circle, Syed Shahanawaz, an Ex-President of the North Texas Cricket Association, who has also held several national cricket leadership positions in the last 2 decades. He has a solid cricketing pedigree having represented the Karnataka under-19 side as a fast bowling all-rounder. In NTCA Shah has a unique record of having scored a century in less than 30 + balls twice.
Right at the top, Noman Khan is a solid Wicket Keeper batsman who makes everyone look like a spinner standing up to the stumps. One of the friendliest human beings you’ll see, he has an amazing sense of timing with the bat with effortless 6s around the par and has a 37 ball 140+ to his name. Amer Sheikh is like a fine scotch getting better with age – he has this incredible record in NTCA with nearly 10K runs and 400+ wickets that it is mind boggling. Originally a right handed medium pacer he remodeled himself about 15 years ago and switched to left arm spin and what a change! Suhas Naik is a proper Mumbai wala batsman – hands, elbows feet, head, shoulders – everything aligned – copy book batsman. Suhas has the distinction of a 200+ in 120 balls with only 1 sixer – enough said !
Satyapal Chabbra is a Cheetah on the field and can throw 80 yards into the WK’s gloves. Another rock-solid batsman who can bowl nippy medium pace as needed, he is a quintessential team man. Mohsin Khan looks and feels 20 – he is by far fitter than most 20-year old’s. A terrific middle order batsman and a fast bowler, he scores runs for fun. Willy Salmon is our own Ben Stokes – he can bat anywhere in the top / middle order, he can open the bowling and get wickets or contain in the middle overs and he can field anywhere. Faisal Akhtar has the distinction of getting a 100 and 5 wickets with his canny off spinners – and that too twice in NTCA. A terrific top order batsman, he’s a man of many talents including being a professional singer. Vikram Raman from LA has this extraordinary record of being the highest wicket taker in his league for 3 years running across divisions with his left arm spin. Vikram is also a top order batsman.
Amir Syed is a left arm quick who has represented U-16 Pakistan against U-16 England. Playing in the Houston league he has a mean toe crusher and hits balls into the parking lot for fun. Munawar Mandavia is a terrific bowler playing in the NTCA for over 2 decades having the ability to move the ball late either way. A very warm and caring human being as well. Dawood Ahmed from VA has played for the USA and has been a stellar performer on several US tours. He has established himself as an aggressive batsman in many national championships. Ramesh Thyagarajan is an all rounder – has played in the NTCA since 2005 and has also played in leagues in the Northeast from 1990 onwards. He opens the bowling and bats in the top/middle order.
Last but not the least, Arun Vittala is the coach and mentor for the Masters South team. An ex-president of NTCA and someone who has been fortunate to rub shoulders with the legendary M L Jaisimha playing for Hyderabad in the late 70s, he’s a left handed all rounder who has won many games single handedly for his team. With his mental conditioning skills the South is confident of bringing home the trophy in the inaugural Masters tournament.
April 18, 2021 By Masters Cricket USA houston 21 cricket, houston, houston texas, masters cricket usa, moosa stadium, musa stadium, musastadium, over50cricket Comments Off on Masters South