Game 1: First World Cup Cricket game for the USA – no, not just the Over 60s, but ANY USA cricket team! What an honor to be a part of this event. After the long wait and a year of preparation, the team finally arrived at the ground ready to measure itself against the cricket giants of the world. The game was against the “Rest of the World” – primarily a team from England. English county cricket championships are at the same time as the O60s CWC and England did not field an official team. ROW has players from UAE, Kenya, and several other countries. There was a cap ceremony for the playing 12 – a special that a player gets only when in the playing 11 or 12 for the national team. After the honors and warm-up it was time to take the field.

USA won the toss and Captain Mihir decided to field first to try and understand an unfamiliar pitch. Bowlers did reasonably well to restrict the batting side to a par score of 188/8. Going in to bat, the USA batsmen, unfamiliar with the playing conditions made the mistakes of going bat foot on unpredictable pitch and playing aggressively. The team was bundled out for 76 runs. The Player of the match (MON) went to a player from the winning team as is customary. But in this tournament, the winning team also gives an award to the best player on the losing side. Wayne Copeland got the award for USA for tight bowling. 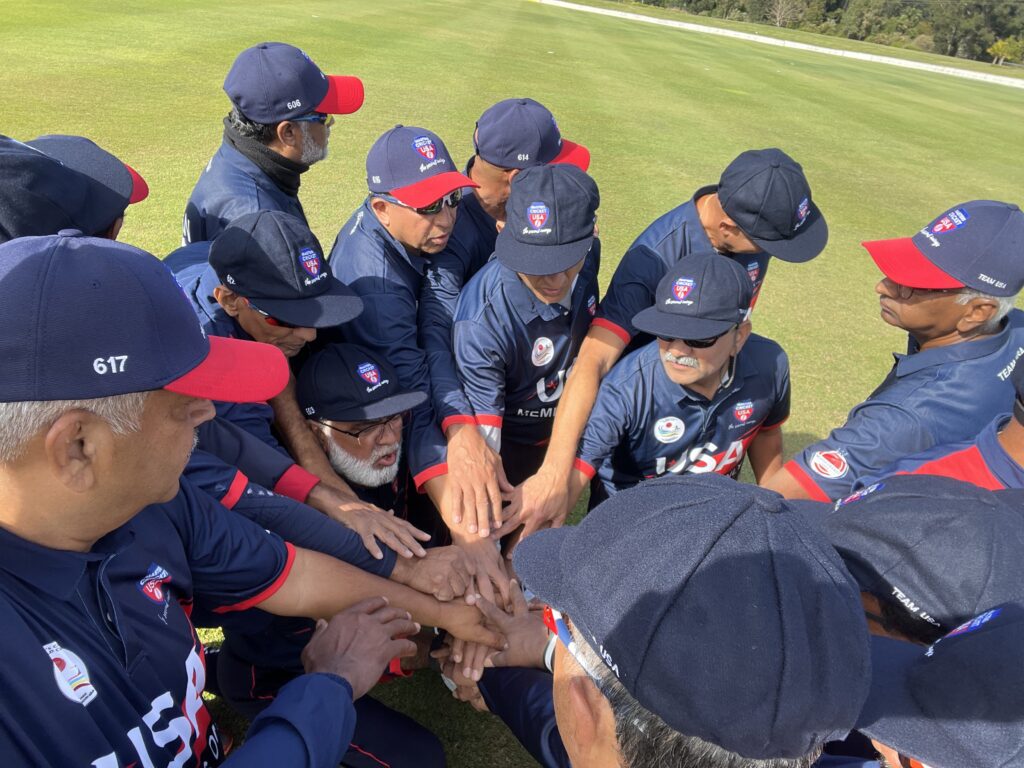 Game 2:  Back to back games without a break. Mighty South Africa team boasting many first class players and one of the giants in the cricketing world! SA won the toss and put us in to bat. After a good start by openers Kirit and CK and some good middle order batting by Greg, USA put up a decent total of 140/9. South Africa was cruising along but good bowling by Dash, Kumar, and David M tightened up the game. In the end it came down to the last over and 11 runs. David bowled an incredible over to seal the win for USA. Wayne was adjudged player of the game.

THE FIRST EVER WIN BY ANY USA TEAM IN ANY CRICKET WORLD CUP!

Game 3: Back to back to back – 3 games in a row for 60 year old bodies! This time against New Zealand – one of the two favorites to win it all. Well – they showed us why they are one of the favorites. We could only muster 125 in 36 overs with CK, Kirit and Greg once again getting some runs while the rest of the scores looked like binary code . New Zealand methodically took apart a tired USA fielding side with singles and doubles and easily reached their target with the loss on just one wicket. Dash was declared player of the game of the losing team.

Game 4: Rain-Rain-More Rain. A very very strong Pakistan team with a couple of big wins, centurions, big scores against a fledgling USA team. After a very delayed start with the game reduced to 25 overs, the desire to not get wet and injured in rainy conditions trumped the desire to play cricket. We shared points in the abandoned game.

Game 5: Defining moment. Mighty West Indies! A win would be epic for USA. West Indies won the toss and put USA in to bat. Good batting by CK, Dave R, and Mike Riley helped USA get to a good total of 198. Dash struck very quickly taking 3 wickets in two overs and had WI reeling at 2 for 3. Roy and Sieuchan built a good partnership of 45 runs before Dave R broke that partnership with good bowling supported by slip catch by Jay. Mike Riley and Dave R kept a tight reign and then Jay followed with a very economical spell giving 2 runs an over with the required run rate climbing. However the partnership was building and up to 47 when Jay took out the dangerous lefty Sieuchan with a caught and bowled. With the top batsmen gone and run rate required at 7, it was a matter of time for the batsmen to go after every ball and collapse. USA BEAT THE MIGHTY WEST INDIES!! CK was the Player of the Game for his half century.

At the end of the round robin, USA was tied for points with Rest of the World in Group B and with India and Wales in Group A. Top 4 teams in playoffs vying for positions 1-4 are Australia, New Zealand, Pakistan, and Canada – expected four. The next 4 teams now vying for positions 5-8 are USA, ROW, Wales, and India. Positions 9-12 will be between Sri Lanka, South Africa, West Indies and Zimbabwe. Wait….WHAT?? USA is going to finish in the middle tier of a Cricket World Cup (O60) above West Indies, Sri Lanka and South Africa?? Well Done!! What an achievement for USA Cricket. Time for the cricketing world to note the emergence of a new cricketing powerhouse.