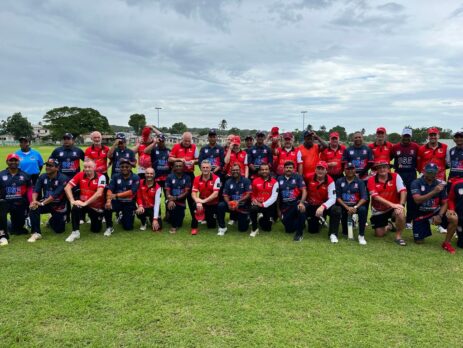 For the second game in a row, USA Masters dominated their opponents and outplayed them in all 4 departments of the game, fitness being the fourth. Such domination belies the fact that the USA team is only 2 years old in this format of the game. The only other example I can think of is Afghanistan who in their short cricketing life caught the imagination of cricket lovers and have moved up the ladder in no time. They gained test status in less than a decade of playing the game. Just a few hours back they gave a scare to the reigning World T20 champion Australia who is a mighty opponent.

USA Masters over 50 team is no longer an underdog, in fact it is the team to watch. To get there without appropriate facilities, to beat West Indies 2 days back and the Welshmen today says a lot about the passion, commitment and self-belief the USA team possesses.
Both West Indies and Wales teams have adequate turf grounds and most of their players bred of such conditions. Whereas the USA team is a concoction of players who have playing most of their cricket on matting or Astro turf for the better part of the past 10 years. Only Woodley grounds in LA and recently thanks to efforts of Sakhi Muhammad, Shah Nawaz and their dedicated team high quality facilities came up in TX. Question of having organized nets for players does not arise. It is therefore all up to each individual to shore up his talent and keep abreast with fitness and skill level.

Such a backdrop has to borne in mind while assessing the 2 wins in 2 games. Parak the USA captain won the toss again and put the Welshmen in to bat. One often hears the term “good toss to win” but the truth is the good part can be added only when the team supports and delivers what the captain set out to achieve. The USA bowlers and fielders ensured it was a good toss to win when they beat the West Indies and today again the unit ensured it was in fact a GREAT TOSS TO WIN.

The Wales openers would have faced these grey skies as often as those of you from LA see traffic jams. Despite that familiarity, both USA new ball bowlers Humayun Bashir and Mohsin Khan ensured Iwan Rees and Rowan Evans were dragged out of their comfort zone. Well begun is half done and that’s exactly what Humayun and Mohsin did. They bowled immaculate lengths and lines and gave no room for both the batsmen to express themselves.

The pressure paid dividends as both the openers feel LBW to Humayun and Mohsin respectively. Shah Nawaz replaced Mohsin who hurt his ankle trying to save a straight drive. Shah Nawaz is a very interesting personality who contributes in a dual mode; one as a player and another as an administrator. He dons both these caps with equal aplomb showing is terrific on the field and as good off it. Shah Nawaz bowled a very tight spell continuing from where Mohsin left. 6 overs for 17 runs says it all and the wicket he took of David Adams showed the thinking and intelligence behind his bowling. Shah Nawaz tucked Adams on the middle and leg pegs for 3 balls giving no room and then bowled the sucker ball outside the off stump at a length to ensure the ball reared a bit. Adams could not resist the temptation and was drawn like a “moth to fire” and edged to gully where Raj Badadare completed a smart catch.

Parak was meantime having his thinking cap on all the time. Noticing one left hander after another coming into bat, Parak brought in Raj Badadare to bowl from one end. Raj has a classical off spinner’s action which is a connoisseur’s delight. I saw some very good off spinners from India; Errapalli Prasanna, S. Venkataraghavan, Harbhajan Singh, V Ramnarayan, Shivlal Yadav, Kawaljit Singh and my favorite Anantha Vatsalya. More recently all of us are seeing R Ashwin. Of this lot Ashwin and Harbhajan have the best international record but their actions are jumpy, jerky and not silken smooth.

S. Venkataraghavan probably had the smoothest of run up and action of the off spinners listed above. Moment I saw Raj in Houston a few weeks back, my mind went to S. Venkataraghavan’s action. YouTube is a great source for comparisons for those interested.
Anyways to get back to the game, Raj came in and bowled a spell which tightened the screws driven in by Humayun, Mohsin and our TWIN ROLE MAN Shah Nawaz. After bowling 2 tight overs Raj changed to round the wicket as he was bowling to left handed batsmen. The move paid instantaneous dividend as Malith Madurasinghe groped forward, was beaten in the air and off the wicket and Mr. Reliable Parak Anantha did the rest. It was an off-spinner’s dream delivery which drifts in the air and turns off the wicket.

Parak was outstanding with the gloves, as an opener one hates it to see the keeper stand upto the stumps. This restricts the attacking instincts of openers and the feeling of someone breathing down your neck sets in. Parak kept upto the stumps to Mohsin and took some balls which kicked off a length with ease of a 19-year-old. The stumping off Raj’s bowling was completed in a flash, clean as whistle collection and speed of a gun to whip the bails.

Raj Badadre and Shah Nawaz ensured the Welshmen got not respite, the only respite was from the rain. Parak rotated his bowlers very well, Kuldeep Patel and Chintan Patel came in to deliver the clean up act. Kuldeep had impressive figures of 2 for 14. The Welshmen were dismissed for 84 a very paltry score, which came about thanks to a brilliant, combined bowling effort from USA team. The conditions nor the wicket warranted a collapse of this nature.

Chasing 85 to win, USA openers again gave a flying start, Sunny singh who took a liking to the trees 2 days back was again set to send the fielders on a leather hunt. Unfortunately, he got out in an attempt to give a rousing start. Rafey if anything played even more freely and stroked the ball more than he did in the previous game 2 days back. Rafey has all the attributes of a SOLID OPENER who plays the ball on its merit and plays the match situation to perfection. A sense of calm surrounds him when he bats, he is unruffled by surroundings and by what is happening at the other end.

After bowling a very tight spell Syed Shah Nawaz was not done for the day. In fact he ensured the Welshmen don’t get too much time on the field to reflect on their batting. Shah Nawaz stroked the ball to all parts of the ground, carting 3 sixes to the Mid-wicket- Long on regions. While Rafey was silk smooth Shah Nawaz was brute force, between them they finished the game before Welshmen could get a break for drink. I am sure the Welshmen were quietly thanking Sha Nawaz and Rafey for putting their misery to an early end.
A thumping 8 wicket win after Fazal came in give the finishing touches with a massive trademark six. Neither of the games team USA’s resources were troubled let alone tested.

The USA team new ball bowlers followed by spinners with a shrewd and astute captain are a handful for any opponent. The bowlers are not giving any opportunity for release shots, immaculate lines and lengths are making it very difficult for batsmen to score. The best part if no bowler is coming across as one who can be targeted.

The USA team batsmen are hardly getting a hit to show their prowess. It has been as professional performance as there can be. It has been a great experience watching both these games and see the USA team bowl, field and led like champions.
Talking about watching, the camera work in today’s game was thankfully way better than the first game. At the first game one felt like a judge who was invited to a Beauty Pageant and made to sit at a spot from where you could either see the beautiful contestant’s Torso or her body below the waist. Based on what you saw you would need to imagine the rest and make a judgment call.
The angle at which the camera was placed today one could see the entire stage on which the all the attractive contestants were displaying their INNER (Intellectual) and EXTERNAL BEAUTY!! By that I mean one could see the game better, read it better as one could see the ball leave the bowlers hand and either be intercepted by the batsmen or nestle comfortably in the Keeper’s hands.

Commentary from our team was wonderful. It is easy to sit back and write these columns, you have the advantage of time to reflect back. Commentating on a game is very challenging task. Your articulation skills, game knowledge, wit, presence of mind all come into play. Great job from our team. 2 of them held fort for 4 hrs of the duration of the game.

Last but not the least, who ever is whistling after every boundary or wicket taken by USA team is doing a fantastic job. There is rhythm and sweetness in the whistle. Please identify yourself and continue whistling your way to the last game. WHISTLE PODU as CSK supporters say!!!
Cheers till we meet again in 2 days!! 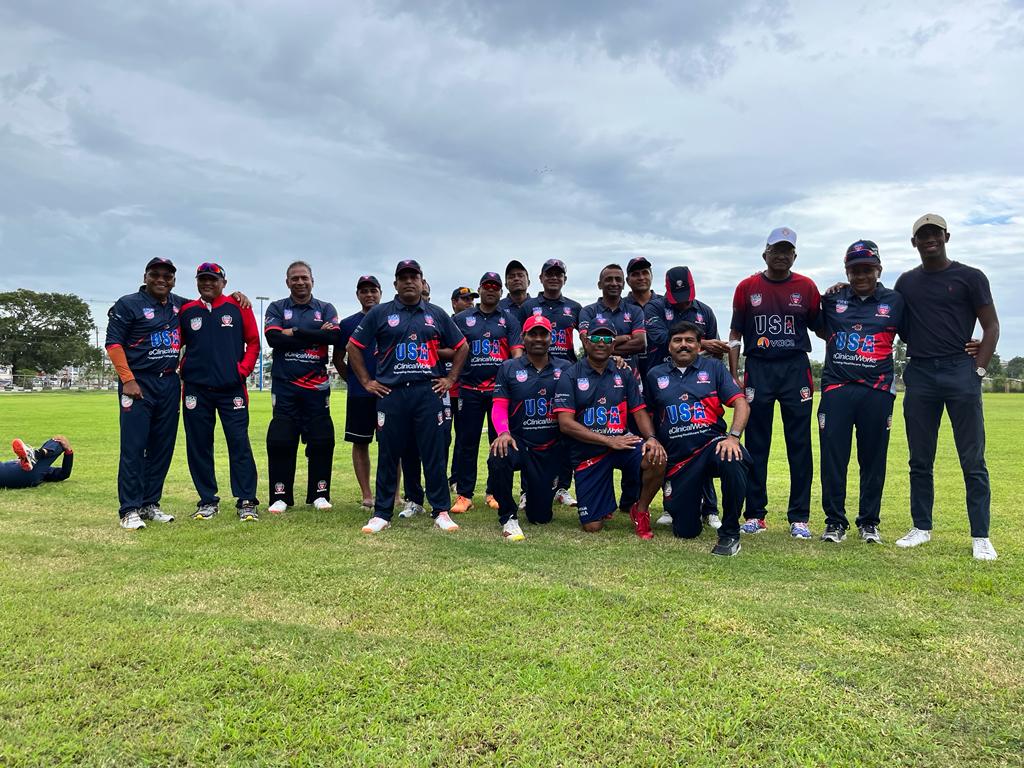 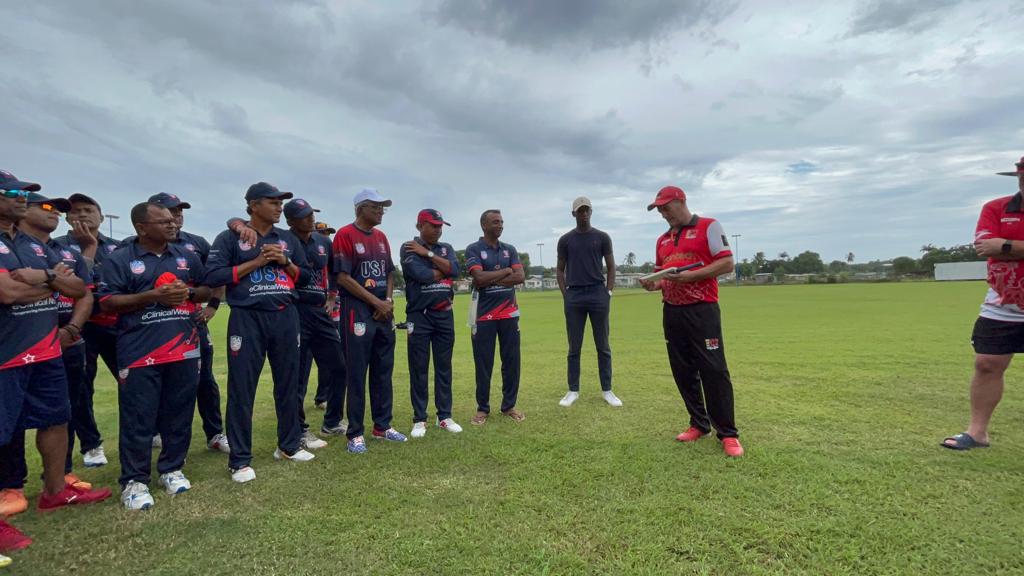 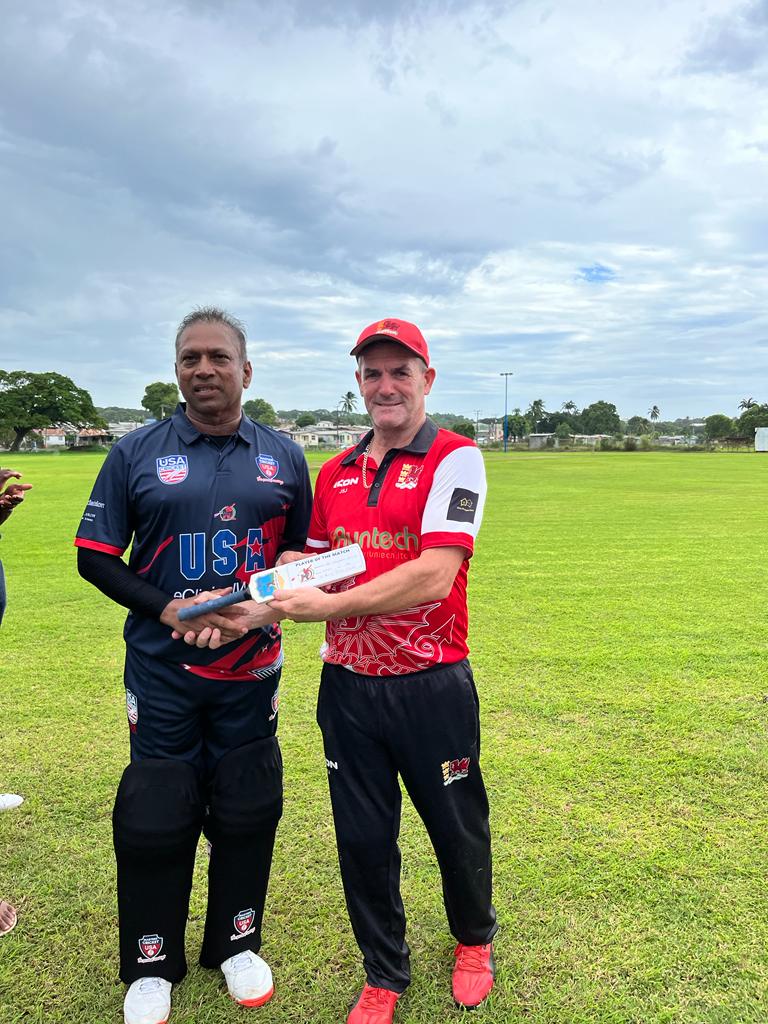 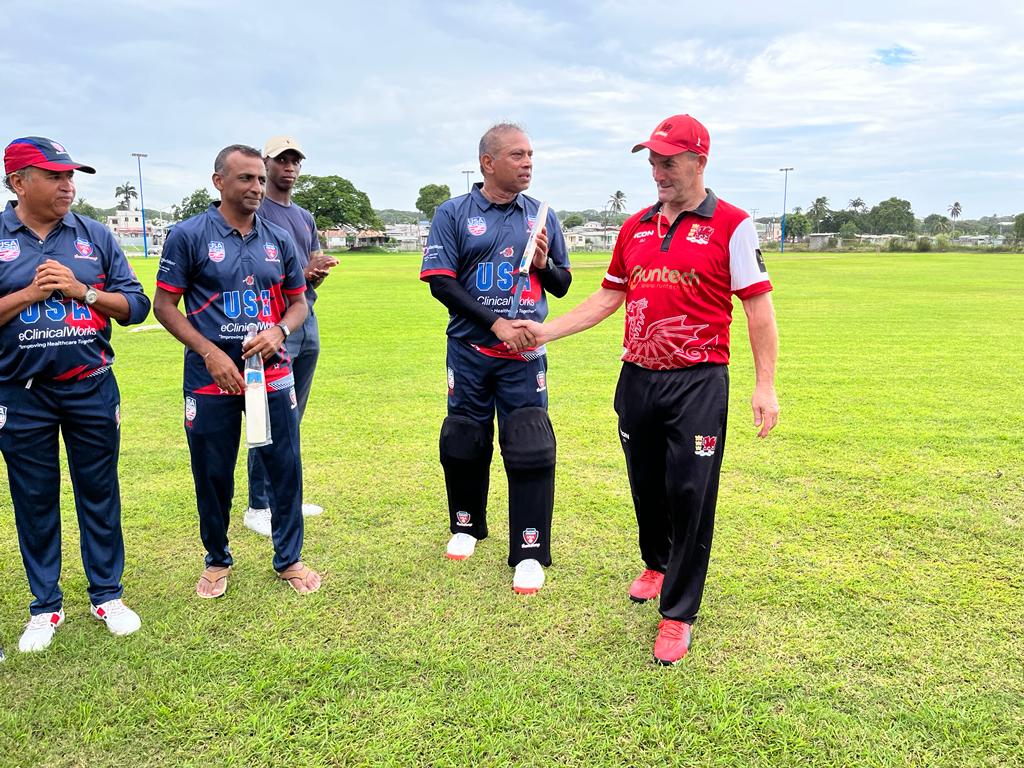