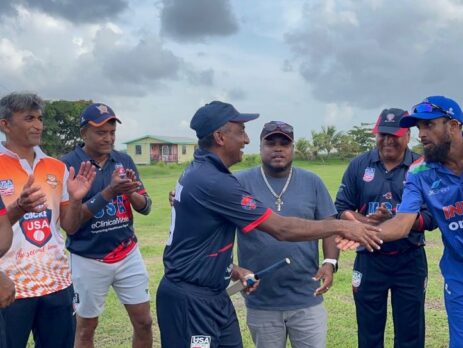 This was the first time I was rooting for India to lose a game, that in itself was a different experience. I am a US National now, play in the USA and am part of the US Masters family. USA masters playing India Masters and my loyalties had no shades of grey.
I don’t normally take this long to recap a game and get rather anxious to air out or pen down my views. This game was quite special, it was a fight between two shades of blue. The sky blue of India Masters vs the Sea blue of the USA masters. The Caribbean is an extremely colorful place one can read as much pun into it, but that’s a fact. One gets to see all COLORS of life there, a vibrant place which satiates various appetites.

The game played out yesterday satiated the appetite of connoisseur, the player, the officials, the political class, the avid viewer, the YouTube follower and the one man show BRIAN WALTERS!!! More about this voice of masters cricket later.
Having won 2 games, the USA team earned a well-deserved break to explore the trills of Barbados. Thanks to our media team we got to see some pictures of the masters at various locations; beaches, historic Oval, apart from the dance moves of Raj Babadre enjoying the late-night life at Discotheques.

Monday morning was back to work for the team and support staff. Meantime the rain gods also decided to have some fun and danced to their own tunes leaving the beautiful Wanderes ground a bit damp. The outfield was damp, as was the wicket which was cold and damp (from what we were told and could see).

A cold and damp wicket is a nightmare for most batsmen and no wonder the deeds of players like Geoff Boycott, Ted Dexter, Dennis Compton just to name a few are talked about even today. Late 70’s or early 80’s saw the wickets being covered after every day’s play and before the match began. A damp wicket is a bowler’s paradise as the ball, seams, swings, and spins.

Iqbal Khan the Indian team captain won the toss and opted first use of the PARADISE by bowling first. The Indian bowlers made the most of the dampness in the wicket and got regular break throughs to put the USA team under tremendous pressure. Sunny, Vakil, Chhabra, were sent back and the score read 25 for 3 wickets. Syed Shafiq was the only one getting to terms with the wicket and high-quality bowling unfortunately, he too got out with score at 44. Shafique was actually getting to terms with the wicket and settling down before being dismissed. It was all fours 44 for 4. As they say misery comes in waves and another wave swept the USA team with Chintan Patel getting run out. Humayun Bashir mean time was laying the foundation for a fight back and he needed an ally. The first ally he found in was Raj Badadre and between them these two batsmen were resolute in defense and decisive in attack. They added 23 runs but very importantly played out 11 overs and consumed time.

When wickets fall in clumps you need 2 cool heads to trust their defense and bide team which is exactly what the pair of Humayun and Raj did. The more Raj played with confidence the more Humayun trusted his striking ability. Just as the pair looked set to steer US out of stormy waters, Raj got out. The Indian bowling was relentless and constantly demanding attention from the USA batsmen. There were no lose balls or easy runs on offer, every run had to be eked out. Humayun played the perfect role in the context of the game.
After Raj got out the stage was set for Fazal to play his natural game and take the attack to the bowlers. After playing 2 or 3 quiet balls, Fazal went about the game in the way he knows best. A brilliant and ala Steve Waugh hit to long on followed by lovely sweep shot got him into the rhythm. Unfortunately, he lost Humayun just as a revival was looking on the cards.

To make things worse Fazal got out after looking a Million $ and at 114 for8 USA team was looking down the barrel. When you face a barrel, the Bollywood Hero may look calm and the quirt of a second turn the head of the barrel facing the holder. But that is not how It goes on a cricket field. On the cricket field when you face a barrel you need to have the nerve and calm to stare it down and work your way over a period of time to turn the head. The USA team had just the right man to face the barrel in their captain PARAK ANANTHA.

Parak assessed the situation and nudged his way around without taking any risks and stills scored at strike rate of 73. He ran like a hare between wickets and was given great support by Zubair Hussain. Between them they added 44 crucial runs which in the end proved match winning. The momentum shift occurred during this partnership.

Parak was calm in the storm he captained the ship out of choppy and stormy waters, he had an able CHIEF MATE on the ship in Zubair Hussain who played his role to perfection. Between them they gave team USA a score to defend.
Chasing 158 team India got off to a very reasonable start. The wicket had dried out a bit with the Sun baking any dampness out. India lost their first wicket at 24. The second wicket pair of Verinder and Iqbal batted very steadily and added 30 runs. Iqbal Khan was looking very much at ease and had the technique and strokes to play a match defining innings.

Chintan Patel dealt the first important blow by getting an aggressive Verinder caught by Sanjay Pandya. Sensing an opportunity and seeing Iqbal was playing the bowlers comfortably Parak made a change and brought in Raj Badadre. The very first ball from Raj got a dangerous looking Iqbal out LBW. Iqbal was not happy with the LBW call from the umpire and displayed substantial dissent at the decision. That call by the umpire did not look a howler if anything the only question was if impact was outside the off stump, barring which it looked out.
It was a telling blow from which Indian team did not recover and the theatrics of the captain Iqbal did not help. Dinesh Kumar and Shyam Sunder then counter attacked, and runs were leaking at both ends. Even Chintan Patel who normally bowls his overs very economically was taken to the cleaners.

Just as the game was getting out of grasp, Dinesh was run out thanks to an outstanding fielding effort from Shafique who swooped on the ball like an eagle on its prey and broke the stumps at the Non striker’s end. In low scoring games like these such fielding shift the momentum decisively. The Indian team just did not recover from this blow.

Parak the shred captain seized the opportunity and rotated his bowlers. Chintan varied his pace and troubled all the batsmen barring Dinesh Kumar. Chintan’s bowling proved a handful, and he got Preetinder caught behind by Parak who once again kept wickets very well. Kuldeep Patek contributed his bit with the ball ad did Sanjay Pandya. Fazal was brought in to do a role and he did it to a T by getting a set Shyam Sundar out.

It was a team effort one in which every player bough into the concept of NOT GIVING UP till the last ball is bowled, the last wicket is taken / last run is scored. One could see the will and spirit in the team, the determination and the passion were all on display.
A big shout out to the entire squad, the captain, players, coaching staff, and support staff. Last word goes to Mr. Brian Walters. There is something special about that last name a famous son of Australia and one of the best batsmen the game has seen DOUG WALTERS!! Much like Doug Walters stroke play, Brian was stroking his way all day commentating on a thrilling game. You needed a pro voice to do justice to game of this high quality. Brian kept the listener thoroughly engaged with his knowledge of the game. His baritone voice and tone modulation added a great flavor to a game which had the ebbs and flows of an ocean tide. Thank you, Brian.

Well done team USA, Cheers till we catch up again. 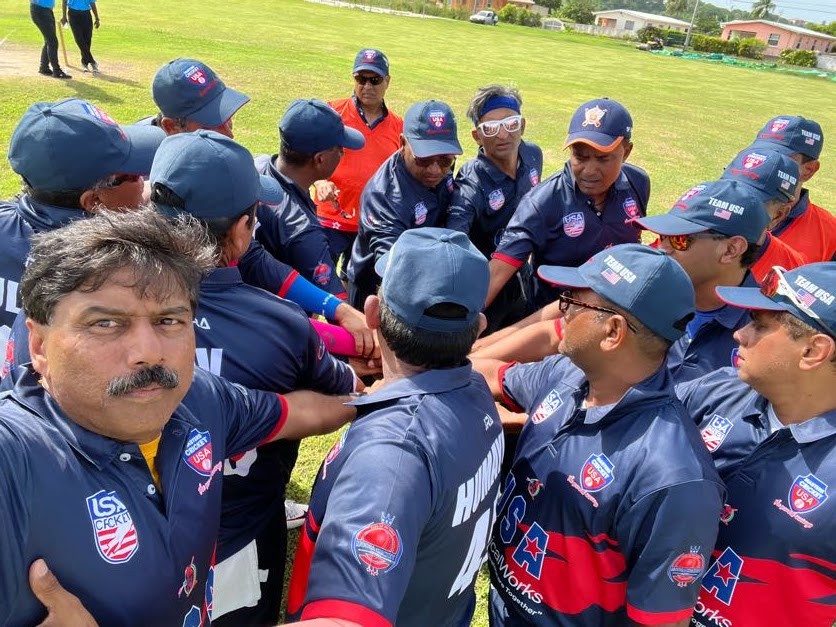 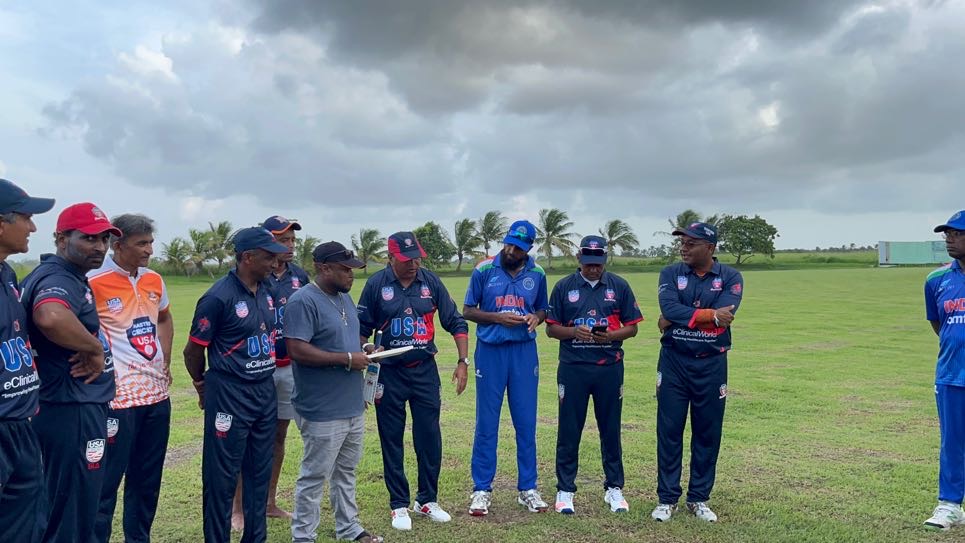 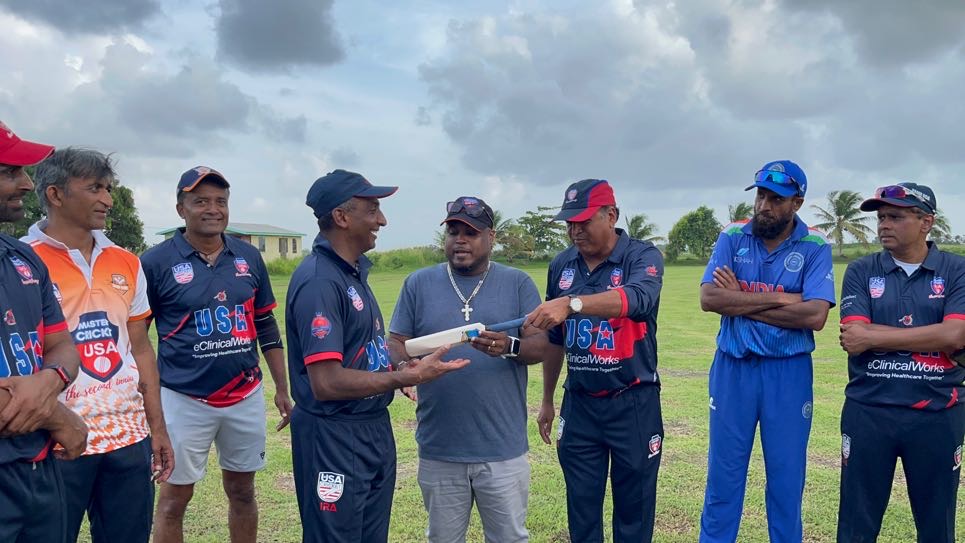 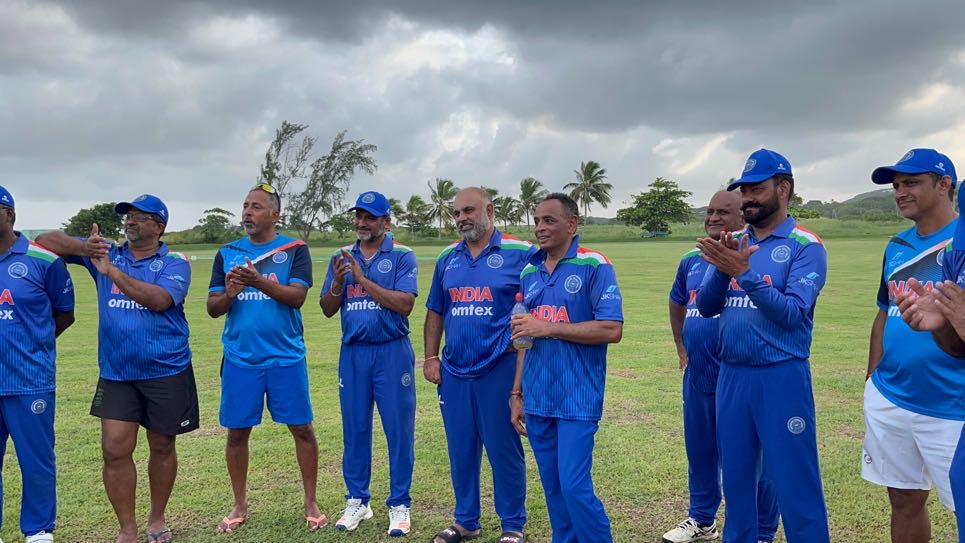