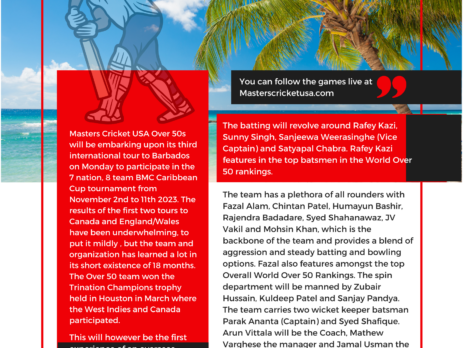 On the eve of US Masters O 50 team heading out to the Caribbean to take part in the Caribbean cup Ravi Suri Interviewed the Coach Arun Vittala and the team vice-captain Mr. Sanjeewa Weerasinghe. Cricket in USA has a come a long way; from being a social event in the 90’s to friendly competition in early 2000 to having a Minor League to parallelly have a veterans or MASTER’s team in over 40, 50 and 60 age groups. It is indeed a case of Cricket in the US on a rapid rise.
The Masters over 50 USA team is about to embark on a tour to the Barbados to participate in the Caribbean Cup 2022. The team is led by Parak Ananta, Sanjeewa Weerasinghe is his deputy and Mr. Arun Vithala is the coach of these 50 PLUS YOUNG BRIGADES!! Today I have with me Mr. Arun Vithala and Mr. Sanjeewa Weerasinghe to talk about the upcoming tour, about master’s cricket in USA the spice and sugar around it.

Ravi Suri “ Thank you Coach and Sanjeewa for your valuable time. Wish you both the very best on the tour, I am confident that the team will get us laurels and wins. Have a winning and pleasant trip. Safe travels.”